MBL's Best Of The Web

Ok, Do you vote? I'm really talking to all of the women in the room. Gentlemen, feel free to take a break, get a coffee, I'll get back to you later. But really, women, do you vote?

I'm definitely not a political activist. You'll NEVER see me post anything about politics, politicians or any hot button topic on any social media platform. NEVER! 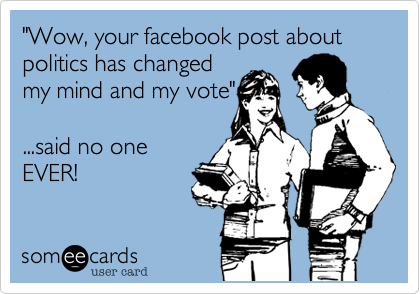 "Rantic found that 94 percent of Republicans, 92 percent of Democrats, and 85 percent of Independents said they'd never changed their view of an issue based on a Facebook post."

And depending where you stand on certain issues, it can cause all sorts of hatred and misunderstanding. I believe what I believe and I'd be happy to have a discussion about it with anyone. Just not via social media. Thank GOD we live in America, where everyone is entitled to their own opinion and the right to vote with it. And I will defend your right to do so!

So back to original question. Do you vote ladies? It is the 100 anniversary of the women's suffrage movement. And as women, do we really understand what that means. A mere 100 years ago we wouldn't have been allowed to vote. My Grandma was born in 1900 and would have been 20 at the time. I always marvel at the changes she saw in her 90 years. So don't let these brave women's work be in vain. I don't care who you vote for. JUST VOTE! I think of it not just as a privilege but as my duty. JUST VOTE!

1. The US women’s suffrage movement had its roots in the abolition movement.

In the fight for women’s suffrage, most of the earliest activists found their way to the cause through the abolition movement of the 1830s. Abolitionist groups such as the American Anti-Slavery Society (AASS), led by William Lloyd Garrison, provided women with opportunities to speak, write and organize on behalf of enslaved people—and in some cases gave them leadership roles. Prominent female abolitionists included the sisters Angelica and Sarah Grimké, Lucretia Mott, Harriet Beecher Stowe and the former slave Sojourner Truth, whose “Ain’t I a Woman?” speech in 1851 earned her lasting fame.

In 1840, when Mott and Elizabeth Cady Stanton attended the World Anti-Slavery Convention in London, they were forced into the gallery along with all the women who attended. Their indignation led them, eight years later, to organize the first U.S. women’s rights convention at Seneca Falls, New York.

2. After the Civil War, many abolitionists and women’s rights activists parted ways over women’s suffrage.

In the early years of the women’s rights movement, the agenda included much more than just the right to vote. Their broad goals included equal access to education and employment, equality within marriage, and a married woman’s right to her own property and wages, custody over her children and control over her own body.

After the Civil War, debate over the 14th and 15th Amendments to the Constitution— which would grant citizenship and suffrage to African-American men—inspired many women’s rights activists to refocus their efforts on the battle for female suffrage. Some, like Stanton and Susan B. Anthony, campaigned against any suffrage amendment that would exclude women, while some of their former allies—including Lucy Stone, Antoinette Brown Blackwell, Julia Ward Howe and Frederick Douglass—argued that this was “the Negro’s hour” and female suffrage could wait.

3. Susan B. Anthony (and 15 other women) voted illegally in the presidential election of 1872.

In 1868, a group of 172 Black and white women went to the polls in Vineland, New Jersey, providing their own ballots and box in order to cast their votes in that year’s national election. Between 1870 and 1872, around 100 women tried to register and vote in the District of Columbia and states around the country.

If you liked this, check these out!

We Went Vegetarian for One Week! Here’s How it Went!

How To Find a Weight Loss Doctor

The Rise of Weight Loss Surgery During the COVID-19 Pandemic

MyBigLife.com does not provide medical advice, diagnosis or treatment for any medical condition.

If you are having a medical emergency please call 911 immediately!​

Hey - Before You Go,

How About A Free Holiday
Gift From MBL?

Download Your Copy of Our Healthy Holiday Recipes Ebook!